I saw this on pinteret some time ago and it was my inspiration.  However I didn't have wheat bran.  Is that the same thing as wheat germ?   Well I didn't have wheat germ either as I had thought but I must have tossed it when cleaning out the fridge one day.   Well I found that out after I had opened the beer and set it to boil to make some beer soap.  So I improvised........
http://www.greatcakessoapworks.com/handmade-soap-blog/index.php/how-to-make-beer-soap/


When working with beer, there are some very important things to know and remember.  First is that you need to cook the alcohol out or else your soap will seize.

The second thing is you can use beer as the only liquid in your soap or part of the liquid.   If you use it as the only liquid you will need to take some safety measures first.  Beer tends to volcano up out of the container used so I suggest you use a much larger container than you normally use to mix your lye solution in.  You must also make sure it's heat proof and can withstand the high temperature that takes place when the lye reacts with the beer.   Use a 2 quart pitcher or a gallon one depending on the size of your batch.  (you know the kind you make kool-aid in... rubbermaid etc)   Put the pitcher in your kitchen sink or another bowl just in case it does volcano over.  That way you don't end up with a mess you would rather not have to clean up.   Pour the lye into your beer very, very, very slowly.  I can't stress this enough.  It will smell terrible so I usually hold my breath while I stir sprinkling the lye in every so slowly.    Let it cool down and come down to room temperature before using.

But for this recipe I use water with my lye that I pre-mixed some time ago.   This way I don't have to wait for my lye solution to cool and using a little math I know how much additional liquid to add.   Using equal parts water and lye I pour that into a small pitcher and set it aside until I am ready for it.

Always use a lye calculator to figure out how much lye and total liquid for your recipe.

This particular batch that I made I used 400 grams of oils.
I used 26% Lye Solution but you can change that to your own preference.  I just personally like the additional liquids in my soap.
7% Superfat (lye discount)

The benchmarks came up on soapcalc as this.   This is a bit different than my normal soap as the cleansing number is higher than what I normally make for bath soap.  But I am using this in a soap scented with a mens fragrance and I wanted those extra cleansing points.
Hardness 40
Cleansing 21
Conditioning 55
Bubbly Lather 35
Creamy Lather 33

Remember oils are not interchangeable for the most part but you can change a few.
* ~ If you don't have tallow you can use palm.  I would not suggest lard as it's just not has hard as the others, but that is my own personal preference.
** ~ If you have only have palm kernel oil or coconut oil you can use 30% of one or the other instead of both.
*** ~ The 15% of castor oil is critical as it boosts the lather, but also it is the balance of the whole recipe.  It doesn't make the soap sticky as some report if the recipe is balanced in the first place.
**** ~ The last three oils that total 35%.  Sunflower, avocado and olive oil but you can can sub whatever oils you happen to have or want to use.  But I would watch close on how much soybean (vegetable) oil and canola oil you use keeping them low percents to 8% or less of each one if you are wanting to use either of these.  The reason is because these oils are prone to DOS (dreaded orange spots) in soap and can go rancid in your soap after the soap is made.   But if you want to use a butter such a shea, cocoa or mango butter I would suggest between 5% and 10%.   But just so the total equal to 35% total.

Please run your recipe through your favorite lye calculator to get the amount of lye and liquid for the batch you are making.
http://www.soapcalc.net/calc/SoapCalcWP.asp
If you are going to tweak this recipe and use different oils from that I have given to use you can adjust the percents up and down until they are the same as what I have given or what you like.   Personally unless the soap contains a very high percent of olive oil (70% or more) I would not go lower than 40 for the hardness.  Otherwise it's like a kids teeter totter, one number goes up the same time the other number goes down.  So it's a matter of finding the balance of the entire recipe and knowing what benchmarks to look for.

I add all my "additives" as a % PPO.  This means Per Pound of Oil.  This makes is much easier to figure out how much should be used and you can make a small test batch and it's going to be the exact same recipe if you want to make it again but a larger batch.   To figure out how much to use PPO is quite simple.  For example this batch uses 400 grams of oils.   The recommended use of fragrance is 1 oz per pound of oils.  But this can be difficult to figure out if you are using an uneven number or you are figuring your recipe in grams.  So 6% PPO is roughly the same as 1 oz PPO but much easier to figure out.  Multiply 400 grams by 6% = 24 grams of fragrance!  How simple is that!

So for this recipe I used the following additives.
6% PPO ~ Fragrance
6% PPO ~ Vanilla Stabilizer (optional if the FO discolors)  I did not use this in this particular batch
3% PPO Sugar
1% PPO Salt
1.5% PPO Kaolin Clay or Talc (adds slickness to the soap)
.5% PPO Titanium Dioxide
3% PPO Sodium Lactate (liquid) mixed with my lye solution.
Raw Silk Fibers (dissolved in the lye solution)

The sugar is added as a lather booster, while the salt adds hardness.  Because I want to make sure these two dissolve I do add just a little bit of hot water to them.  You can heat water or use hot tap water.  We have a "water boiler" on the counter so I always have hot water ready at a moments notice for a cuppa cocoa or tea.  Or coffee as my hubby prefers his coffee made with a french press.

Kaolin clay or talc adds a silky feel to the soap.   I tend to add titanium dioxide to most of my soap recipes just to help lighten them up as some oils can make the soap look a bit more yellow.   Beer will also affect the color of the soap, but don't expect any beer scent to pull through to the finished bar of soap because it won't.


Now to figure out how much additional liquid that you need.  THESE NUMBERS I AM PULLING OUT OF THIN AIR AND DO NOT REPRESENT ANY AMOUNT THAT SHOULD BE ADDED INTO YOUR SOAP.  IT's JUST TO USE AS AN EXAMPLE.......

I use 76 grams of water mixed with 76 grams of sodium hydroxide (lye) set aside to cool.  If you are using master batched 50/50 lye solution you will want to use 152 grams.
Pre-measure both your water and the lye in their own individual contains before mixing together.
ALWAYS mix the lye into the water and not the other way around.  This is critical!

Now you need to do some simple math to figure out how much additional liquid is needed.  Or in the case of this soap, beer that has been boiled to remove the alcohol and cooled.
234 grams - the 76 grams already added with your lye to = 158 grams of additional liquid.

Because I wanted to go for the look of the soap in the photo in the link at the top and I didn't have any wheat germ, I added colloidal oatmeal instead.  This is ground oatmeal that has the consistency of flour. If you make your own use old fashioned oatmeal rather than instant oatmeal or baby oatmeal.  I know a lot of people use baby oatmeal but the problem with baby oatmeal or baby cereal is that it is highly processed and has a lot of the stuff you want removed and other thing added.

I used 3.5% PPO Colloidal Oatmeal
But after stirring that in I didn't think it would have the look of the soap in the picture in the link above, so I thought hard about what else I had that I could add into it and this is what I came up with.

Jojoba beads..... I have many colors to select from so I added 1.5% PPO of Black Jojoba Beads.
Jojoba beads are made from jojoba oil and is a natural product and not the same as the plastic beads that are being banned and outlawed in some states. They are very small, smaller than a grain of sand.

I added them in with the oils and I should have added them in at trace instead.  I haven't use them in soap before so it will be a new experience.  I think they may have melted just a tad because of the heat it generate when the lye solution is added.  But the effect I wanted with just a bit of color and I think it did provide that.

I did not gel this soap so the color stayed opaque and is fairly light colored even though it contains a generous amount of beer.


Soap Still In The Mold 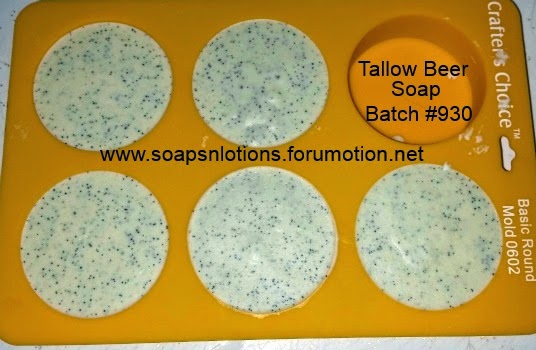 
Well several hours after this soap was made, I did find that jar of wheat germ.  It was new, unopened in the cabinet!  *duh*   Oh well next batch I guess.