If you suffer from dry skin in the winter time then you might want to consider using a soap with lanolin in it.  Lanolin is technically a wax and makes it more moisturizing to the skin when used in soap or a leave on skin care product such as a lotion or a cream. 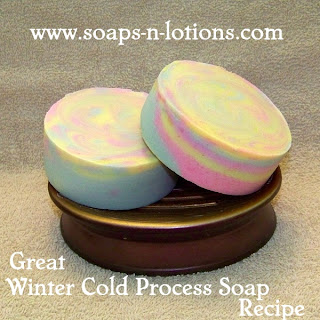 Use SoapCalc to enter your recipe to make the batch size that you need for your mold.

Superfat this recipe between 7% and 9% for extra moisturizing benefits.   This allows more oils to not saponify or change into soap when you mix in your lye solution.   For this recipe shown I superfatted at 9% to make the most of it.

Keep in mind that each oil is different and brings a very specific property to the finished bar of soap.

On SoapCalc the benchmarks for this recipe are.....
Hardness 42
Cleansing 17
Conditioning 49
Bubbly Lather 31
Creamy Lather 40

Use the liquids of your personal preference.  While water can be used why not get a little more creative and try using a milk.  Either a powdered milk or a dairy or non-dairy milk found in the dairy section of your favorite grocery store.

Other additives can be used that you prefer.   I also added a whole egg into my recipe as one of my additives.

If you have not made cold process soap before I recommend that you learn the process first.   You can join a forum such as my fourm the link is at the top right side of the page to learn more about how to make cold process soap and ask questions. 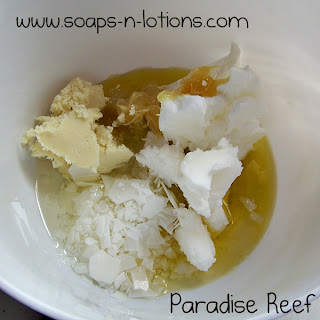 In the first step I put all my solid oils and liquid oils into my soaping bowl.  I prefer to use plastic bowls when I soap and this one happens to be from a dollar store.  So it doesn't need to be fancy.   I also like plastic because I also melt my oils in the microwave.  I don't heat soaping oils until they are very hot, just hot enough to melt the solid oils.

Not shown but I prefer to use a 50/50 lye solution so I don't need to wait for cool down time.  But I pour that into a small plastic measuring cup to be used later.   If you are making up your lye solution, now would be the time to get that mixed up so it can set aside to cool down.  Raw silk fibers were also dissolved into my lye solution when it was made up. 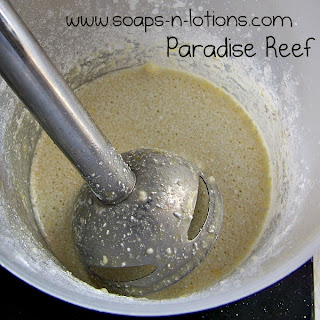 In another measuring cup, this one happens to be a plastic 4 cup measuring cup that is also from the dollar store.   Inside this cup I have my additional water that is needed that wasn't mixed in with my lye.  Also mixed inside this mixture is my powdered coconut milk used at the rate of 4.5 grams per ounce of water.  sodium lactate, sugar, sea salt, talt and a whole raw egg.  It's a bit clumpy but I don't worry about that at this point. 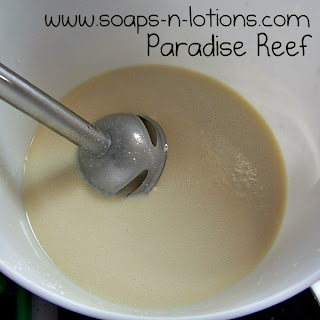 In my bowl of melted oils I dump the coconut milk/egg contents from the above measuring cup.  I also added my fragrance oil and a little titanium dioxide at this point and used the stick blender to stick blend it into a creamy mixture.  Now with the additional liquid it makes it easier to stick blend it and get any clumps out.


Also not shown but I poured a little glycerin into the bottom of a 2 oz white solo plastic cup along with a little bit of the powdered colorant that I chose to use.  I used three colorants, each having their own cups.   From Brambleberry I used Electric Bubblegum, Fizzy Lemonade and Aqua Pearl Mica.  Using a spoon I mixed the colorant into the glycerin.  I used about 1 teaspoon per color of glycerin so it wasn't much, but just enough to get the job done.

I'm also not showing the rest of the steps because I was working and it makes it a little hard to take your own pictures.

If you haven't already put on your goggles and gloves this is the time to do that!  I usually don't put them on until I'm ready to mix the lye solution into the prepared oil mixture. 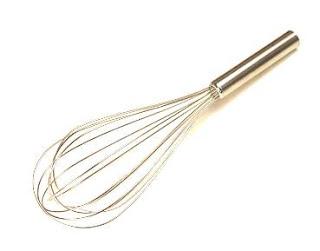 Because I don't want this to move to fast, and I wanted the fluid consistency of my batter I put my stickblender aside. Instead I pulled out my old fashioned whisks.

I whisked it together until it was mixed well then I poured some of the batter into two other measuring cups.  I didn't measure how much was added but just eyeballed it instead.   I spooned each colorant into a different bowl and mixed the colorant into the soap batter.

When it was fully incorporated I began to use a regular soup spoon and poured a spoonfull of batter into each mold compartment.  For this batch I only used 300 grams of oil and I know that amount will fill four compartments of the yellow WSP 3" round silicone mold.   So I poured a spoonful of each color in and kept rotating colors until the colors were all used up.  Because the batter is very fluid it pours into itself creating it's own swirl.  I dripped the batter off the spoon tip in going slowly in a circular patter so it didn't all go in once spot.  I hope that makes sense.

Then once I was done, I used a small spatula and scrape out the very last of the batter into my bowls.   Then I used the tip of a spoon to very so carefully just swirl the top of the soap to give it an elegant look.

And this is what the soap looks like just after it was poured into the mold.  Because I want to keep the light colors and milk was used I am avoiding the gelling process and the mold was popped into the fridge immediately after this photo was taken. 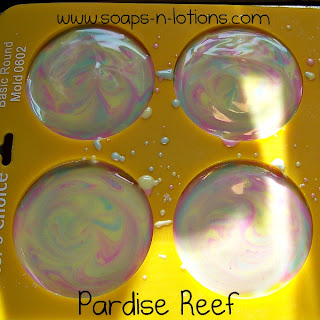 Paradise Reef was the scent used for this soap.  It behaved very nicely without any troubles.
http://www.naturesgardencandles.com/candlemaking-soap-supplies/item/df-0222/-Paradise-Reef-Fragrance-Oil-.html

Scent Description
Let's get away and go deep-sea diving at Paradise Reef. A popular vacation get away place. Paradise Reef is a sparkling fragrance with salt water and fresh air notes. This fragrance begins with notes of nectarine, bird of paradise, and water lily, followed by middle notes of passion flower, orchid, and hyacinth. A well-rounded fragrance empowered by fresh air and salt water notes.

Don't you just want to scrub up with one of these? 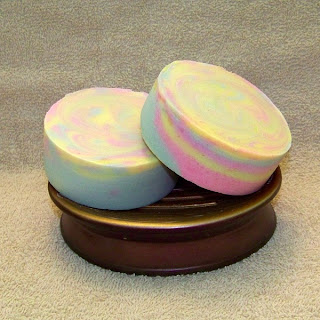 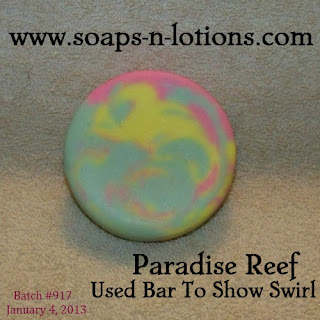